On August 16, 1944, an American soldier prevented the bombing of Chartres Cathedral. Featured below is an account by Dennis Aubrey of Via Lucis, our esteemed Board Advisor. American Friends of Chartres honors the memory of Colonel Welborn Griffin, whose humanistic sensibility and courage under the fire of combat prevented a catastrophe at Chartres.

This article is dedicated to the memory of Welborn Barton Griffith, Jr. His reference in the Wikipedia article about the Cathedral of Chartres reads: “All the glass from the cathedral was removed in 1939 just before the Germans invaded France, and it was cleaned after the War and releaded before replacing. While the city suffered heavy damage by bombing in the course of World War II, the cathedral was spared by an American Army officer who challenged the order to destroy it.”

Griffith was the G-3 of XX Corps under the command of Major-General Walton Walker during the Campaign of France after the Normandy breakout. Initially assigned to protect the south flank of the Patton’s Third Army, XX Corps secured the bridgehead at Le Mans and liberated Angers on 10 August 1944. The corps fought a successful five-day battle for Chartres from 15 – 19 August, and seized a bridgehead over the Aunay River. Chartres was a logistics center for the German Army and an important transportation nexus for the US forces.

By the end of August, the XX Corps had driven across six rivers-the Loire, Seine, Vesle, Marne, Aisne, and Meuse to the Moselle. Towns liberated by the armor and infantry of the Corps included Chartres, Mélun, Montrau, Fontainbleu, Chateau-Thierry, Epernay, Reims, and Verdun. This campaign where they raced across France prompted the Germans to name the XXth the “Ghost Corps.”

Griffith’s position as the G-3 made him responsible for the mobilization and deployment of units for combat and was a key staff position for the XX Corps. For Griffith to take the stance that he did to protect the cathedral – much less making a personal reconnaissance accompanied by a single rifleman – was an extraordinary decision.

Griffith was born on November 10 1901 in the small Texas town of Quanah, just south of the Oklahoma border. He graduated from West Point Military Academy, Class of 1925. He excelled at various sports, including four years as a tackle on the Army football team. He also participated boxing, wrestling, lacrosse and horsemanship. 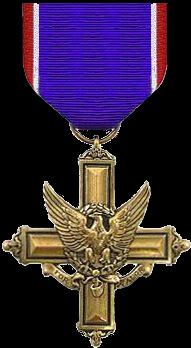 Here is the citation from his Distinguished Service Cross:

The President of the United States of America, authorized by Act of Congress July 9, 1918, takes pride in presenting the Distinguished Service Cross (Posthumously) to Colonel Welborn Barton Griffith, Jr. (ASN: 0-16194), United States Army, for extraordinary heroism in connection with military operations against an armed enemy while serving as Operations Officer (G-3) with Headquarters, XX Corps, in action against enemy forces on 16 August 1944 at Chartres and Lèves, France. On 16 August 1944, Colonel Griffith entered the city of Chartres, France, in order to check the actual locations and dispositions of units of the 7th Armored Division which was occupying the city. Upon observing fire being directed at the cathedral in the center of the city, with utter disregard for his own safety, Colonel Griffith, accompanied by an enlisted man, searched the cathedral and finding that there were no enemy troops within, signaled for cessation of fire. Continuing his inspection of outlying positions north of the city, he suddenly encountered about fifteen of the enemy. He fired several shots at them, then proceeded to the nearest outpost of our forces at which point a tank was located. Arming himself with an M-1 rifle and again with complete disregard for his own safety, Colonel Griffith climbed upon the tank directing it to the enemy forces he had located. During the advance of the tank he was exposed to intense enemy machine gun, rifle, and rocket-launcher fire and it was during this action, in the vicinity of Lèves, France, that he was killed.
General Orders: Headquarters, Third U.S. Army, General Orders No. 75 (October 21, 1944)

It is interesting that the commendation says nothing about his saving the cathedral from certain damage, if not destruction, by American artillery fire. Colonel Griffith also received the Croix de Guerre avec Palm, the Legion of Honor, and the Legion of Merit from the French government.

The story of Colonel Griffith only became known in 1994 when a French amateur historian in Lèves, Bertrand Papillon, investigated the American colonel who died liberating his village and who saved the beloved Cathédrale Notre Dame de Chartres. His researches uncovered the truth and he contacted the Griffith’s daughter with the full story. Every year, on August 16, flowers are placed in front of the building where he died. A plaque, honoring his heroic action, has also been erected on the building. Residents of Lèves saw him fall and die and within hours they had him covered with a blanket, bouquets of flowers and an American flag to await the American burial detail who buried him in a temporary grave.

As a final and sobering note on this history, in the spring of 1945 XX Corps liberated the German concentration camp at Buchenwald.

For further information and commentary about Colonel Griffith, please visit the following articles, ebooks, and websites.

What if Chartres Cathedral Had Been Destroyed in WWII? by J K H Geoffrion

National Review: A Colonel at Chartres by Jay Nordlinger