AFC is governed by a Board of Trustees in compliance with 501(c)3 requirements.  The Trustees are charged with legal obligations to ensure that the organization’s assets serve a public benefit.

Dominique is an economist with an MPA degree from Princeton University and over forty-five years of experience in international development, primarily at the World Bank. Since 2006, works as an independent consultant and has focused her activities on issues related to gender equality, social inclusion, employment, enterprise development, energy, and climate change. As a student in France, she walked the last 40km to Chartres in the annual student pilgrimage. Dominique joined the Board of AFC in 2010 and became its president in March 2013.

Passionate about architecture, stained glass, manuscript illumination, and cultural heritage, Dominique sees in Notre-Dame de Chartres a unique haven for universal understanding, respect, and peace amongst people of all cultures, faiths, and artistic interests. Having adopted the US as her second home, joining AFC is also an avenue for Dominique to strengthen the friendship and cultural ties between the US and France.

She led the development and completion of AFC’s second and third projects: the restoration of the Bakers’ Windows (Bay 140) and the restoration of 12th and 13th C. statue columns, as well as several cultural events. She has forged a number of partnerships with US universities, Museums, and Alliances Françaises in the United States. She lives in Washington D.C.

Damien is a French citizen and Bostonian, Damien is an international businessman with information technology expertise. His career spans over continents from Mexico with France Telecom, to Eastern Europe with GEMALTO, and several countries in South America, launching mobile banking and mobile commerce applications. In the US, Damien has held positions with Nokia, PayPal, and Samsung, and co-created LoopPay.

He now is General Partner for GED Conexo ventures. Damien graduated from the Sloan School of Management of Massachusetts Institute of Technology. Damien has spearheaded AFC’s cultural and fundraising activities in Massachusetts.

Helen has retired from a career in nonprofit leadership, primarily in community public health and social services. She has more than 40 years of experience in nonprofit fundraising, board development, strategic planning and community relations.  Always passionate about the visual arts, she shifted her career in midlife, spending the last 12 years at the Northwestern University Block Museum of Art as director of development. Her other major interest is French art history.

After several visits to Chartres, including a 2019 trip with a group celebrating the 1944 liberation of Chartres and Lèves, she became focused on preserving Chartres Cathedral for the future.  She joined the board of AFC in 2020.  After spending 2019 living in Paris, Helen now resides in Evanston, Illinois and in Paris.

Craig works with the President on special projects. He is a retired U.S. Foreign Service Officer who served in Mexico City, Tunis, Geneva, New York City (United Nations), Durban, South Africa, Nicosia, Paris (special assignment after retirement) and Istanbul in positions ranging from Political Officer and Public Affairs Officer to Consul General and Senior Advisor to the U.S. Ambassador to UNESCO. Craig is an inveterate Francophile, particularly of its churches, monasteries, cathedrals, and…cuisine. He lives in New York City and travels to France as often as he can.

Anne first visited Chartres as a teenager. Her love for medieval art and architecture was planted then, and she later taught the subject at the college level. She joined the Board in 2008 and leads the legal aspects of AFC’s institutional responsibilities and activities. From 2012 to 2014 Anne was AFC’s Executive Director, and rejoined the Board upon leaving that position. Anne practices law in Washington, D.C.

Madeline H. Caviness is a renowned scholar of medieval art, particularly medieval stained glass. She is the Mary Richardson Professor and Professor of the History of Art Emerita, Tufts University. Her ongoing research explores feminist theory in the context of medieval art objects. Her awards are numerous, most recently: Member of the American Academy of Arts and Sciences; Tufts University Award for Distinguished Research and the Seymour Simches Award for Teaching and Advising (2005); and the Distinguished Senior Scholar Award, American Association of University Women Educational Foundation (2005).

She has served as President of the Union Académique Internationale, which fosters international collaboration for humanities projects organized by academics, such as language atlases, dictionaries, archaeological inventories and maps, and text editions. She is also a former President of Corpus Vitrearum Medii Aevi, US. Madeline lives in Boston.

Nick Dierman is a real estate attorney in Los Angeles and is the West Coast counsel to Federal Realty Investment Trust, a Bethesda, Md.-based shopping center and property development company. Prior to working at Federal, Nick was Senior Corporate Counsel at Unibail-Rodamco-Westfield’s Los Angeles office and, in addition to working on issues pertaining to American shopping centers under the Westfield brand, Nick worked on cross-border projects with Unibail-Rodamco’s European portfolio of properties. Nick was raised in Washington, D.C. and attended university at Columbia University in New York and graduated with a law degree from the University of California, Berkeley. He is passionate about urbanism, history, architecture and languages, also an inveterate francophile.

The Rev. Jill K. H. Geoffrion is well-known for her work and seven publications on the labyrinth, two of which focus on the Chartres labyrinth. She has published a guide for pilgrims and retreatants at Chartres and spends a considerable part of each year in residence there. Her work as a professional photographer points to the unique character and inspiration of this church, as well as other sacred sites around the world. As a guide, workshop leader and retreat facilitator, she enjoys connecting the spiritual needs of those who come to Chartres. She also enjoys guiding visitors in enhancing their photography skills to get the best possible shots of this glorious edifice.

Mike Klug works as a Medicare subject matter consultant to the SMP (Senior Medicare Patrol) National Resource Center and SHIP National Technical Assistance Center. Mike’s interest in sacred art and architecture began at St. Louis University where he received a B.A. degree in 1977. He writes a blog called Mandorlas in Our Midst and gives presentations that explore links among churches in Europe and North America through their art and iconography. Mike earned a J.D. degree from the University of Wisconsin Law School in 1984. He lives in Iowa City, Iowa.

Ellen Shortell is a historian of medieval and early modern art, with a focus on Gothic architecture and stained glass. She is Professor of Art History, Emerita, at the Massachusetts College of Art and Design, and holds a Masters degree from Tufts and a PhD from Columbia University. She is currently Vice President of the international board of the Corpus Vitrearum, and past chair of the editorial committee of AVISTA (Association Villard de Honnecourt for the Interdisciplinary Study of Medieval Technology, Science, and Art). The subjects of her research and publications include the former collegiate church of Saint-Quentin, one of the great Gothic churches of Picardy, whose 12th- and 13th-century architecture and stained glass are closely related to those of Chartres Cathedral. Ellen lives in Boston.

Anne Marie Woods has Masters Degrees in French Literature from the University of Chicago and in French and comparative literature from the University of Strasbourg, France. When Anne Marie is not giving tours of Chartres Cathedral, she teaches Public Speaking and Debate at ENSAE, Institut Polytechnique and Écoles Centrale and Supélec in France. She is working with well-known guide Malcolm Miller and is the only full-time American guide in the Cathedral of Notre-Dame de Chartres. Anne Marie is AFC’s liaison in Chartres with Chartres, sanctuaire du Monde. She resides in Rambouillet, France.

Many volunteers have supported the work of American Friends sof Chartres over the years:

Prasadini Bogollagama and Charlotte Lallement-Klaus periodically volunteered with the administrative work. Prasadini also featured in the promotional video for the first fund-raising campaign on Razoo.

George Collinet, renowned radio broadcaster and video film-maker, donated his talents and time for the production of AFC’s promotional video.

Elizabeth Pastan, President of Corpus Vitrearum-US and Professor of Art History at Emery University served on the Selection Committee for the David Whitehouse Scholarship, and is part of the design team for the Servane de Layre-Mathéus Grants.

Luis Fernando Hurtado Roa is a website designer. With a BA in information technology, he helped re-create and maintain AFC’s website. He resides in Miami, Florida. Olivia Kiers and Ben Schulz contributed to website enhancements. Elizabeth Dent energized AFC’s Facebook page with interesting vignettes about Chartres. Numerous volunteers have provided support at special events in the US and in France.

Monika is an international expert in development and marketing in the arts and education with experience in Japan, Germany and the United States. Responding to the invitation of Jean and Servane de Mathéus – co-founders of Chartres, sanctuaire du Monde — Monika created American Friends of Chartres, brought together its first Board of Trustees, and identified its inaugural project. By end March 2013, nearly $250,000 had been raised from approximately 100 people and four foundations, the five lancet windows of the south portal had been restored, and cultural and educational projects had begun. For this “significant contribution to the enrichment of the French cultural heritage”, Monika was awarded the distinction of Chevalier des Arts et des Lettres by the Minister of Culture of France in 2012.

Kai, a former executive of Corning, Inc. who specialized in international business development in China and other parts of the world, was one of three founding trustees of the American Friends of Chartres (AFC) when it was established in 2005. He helped AFC successfully complete its inaugural project in 2013 – the restoration of the five lancets of the South portal of Chartres – as well as AFC’s second project, the restoration of the Bakers’ Windows.

Servane de Layre-Matthéus, Honorary Trustee and President of Chartres, sanctuaire du Monde until January 2020. Servane passed away January 27, 2020. Servane’s life epitomized love, universal friendship and peace. Till the end, Servane dedicated her energy to the conservation of Notre-Dame de Chartres. She believed in passing the torch of “Cathedral Builders” who span centuries, cultures and beliefs. We miss her but she remains our source of inspiration.

Pierre-Louis Roederer, Trustee. After a career as General Counsel with Corning Inc., Pierre-Louis joined AFC as a founding member in 2005 and remained a trustee until January 2015.

Dennis Aubrey, Advisor. Dennis advised on AFC’s website development and communications, in particular through photography. Dennis was a brilliant photographer of sacred art and architecture. Together with his wife and associate, PJ McKay, he undertook a long-term project to document Romanesque and Gothic churches in France and Spain. This Via Lucis project reflected a profound understanding of the technical accomplishments of the medieval builders and a desire to discover the spiritual underpinning of the structures. Dennis was a graduate of the Carnegie Mellon University and a member of the International Association of Architectural Photographers. 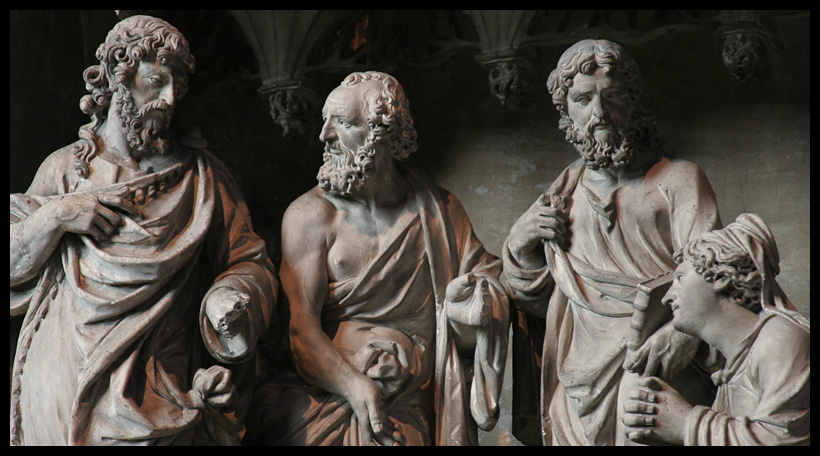