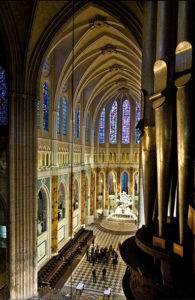 The American Friends of Chartres in partnership with the Cultural Center of the Embassy of France in New York and the Institute of Fine Arts of New York University cordially invite you to attend a screening of the premiere of the film film Chartres, la lumière retrouvée (Chartres: Light Reborn!) (Anne Savalli, France, 2016, 54 minutes).

The partial restoration of Chartres Cathedral that took place from 2014 to 2016 focused on the nave, stained-glass windows, and first figures in the ambulatory. Chartres: La lumière retrouvée; documents this meticulous process through observation and conversations with numerous restorers, archaeologists, scientists, and architects.

There will also be a round-table discussion.

Please use this link to register to attend.

Please note that seating in the Lecture Hall is on a first-come, first-served basis with RSVP. There will be a simulcast in an adjacent room to accommodate overflow.

A small group of friends (Douglas Lister, Enid Gamer, Nilufar Ahmad, Prasadini Bogollagama, Marie-Noëlle Ettori and Alfred & Elizabeth Lister) led by AFC President Dominique Lallement visited Chartres and nearby points of interest from Sept. 12-16, 2018, overlapping with European Heritage Days (Journées du Patrimoine in France). Some participants arrived a few days early in Paris to enjoy some of the many famous attractions including museums and fine restaurants. 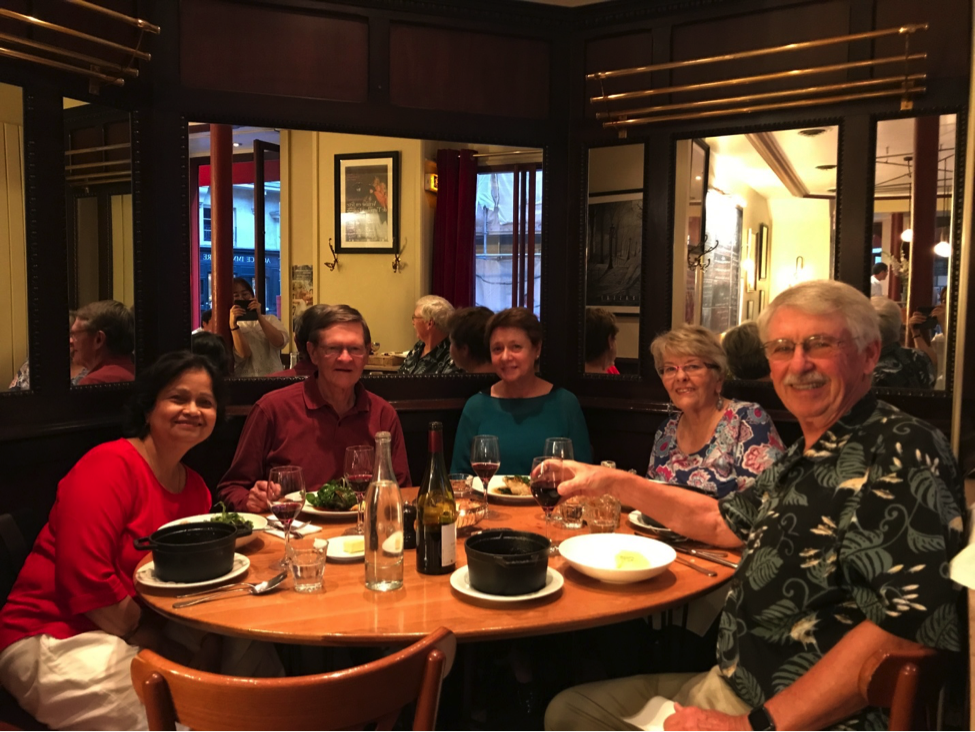 Upon arrival in Chartres, the group was struck immediately by the massive size of the cathedral towering over the city and surrounding countryside and by its glorious collection of over 150 stained glass windows. 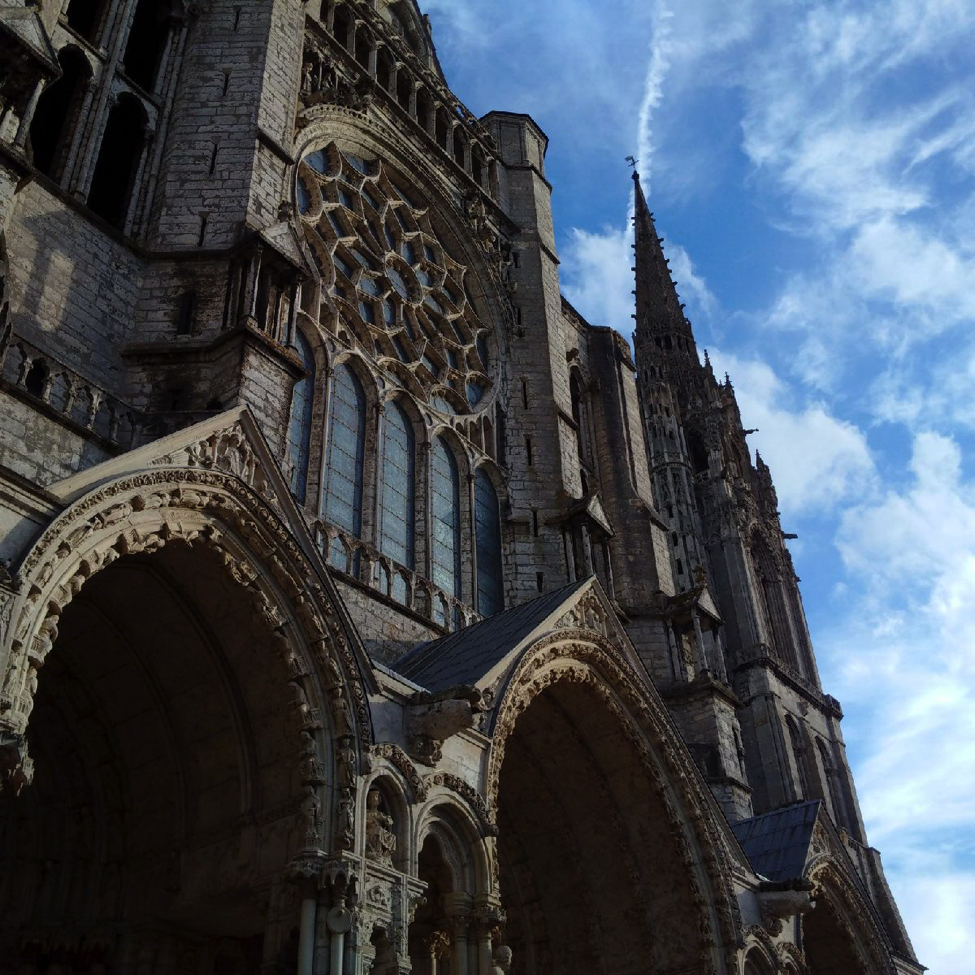 “Front of Chartres cathedral at an amazing angle!” – Prasi 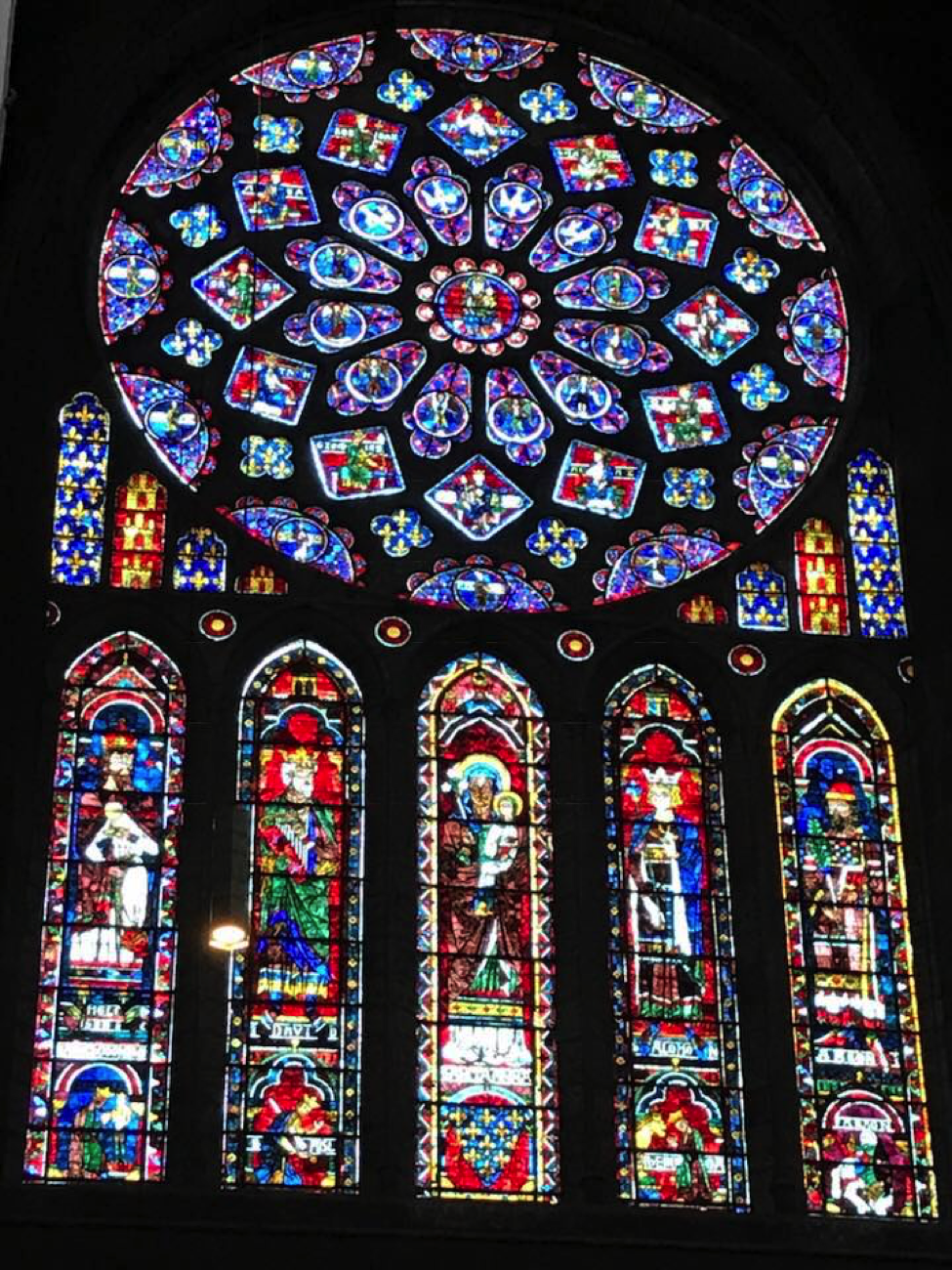 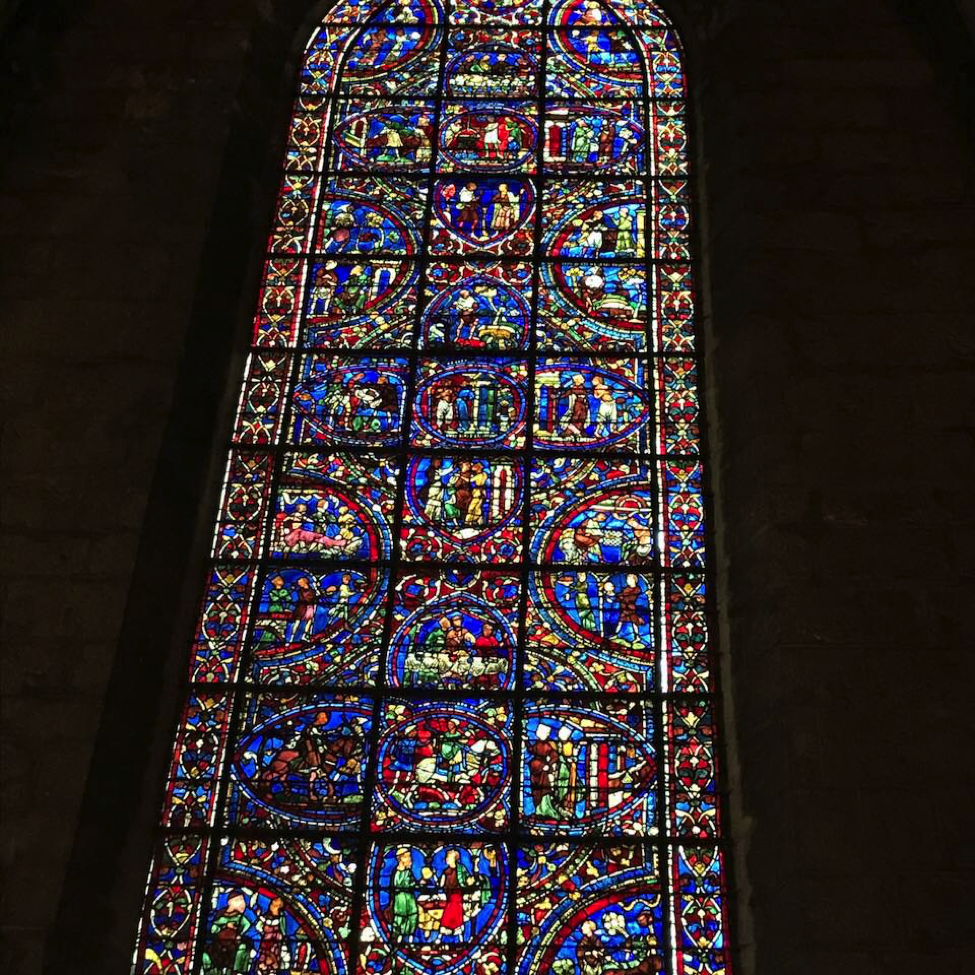 “The windows illustrate biblical stories and daily life in the 13th century when most people were illiterate. An interesting one is about the Prodigal Son: a man had two sons, the good one is ploughing the field, while his brother is asking for his inheritance from his father who gave it to him. Then there are pictures how he is spending his inheritance on gambling, women and wine, having a good time! Soon he lost everything including the shirt on his back and was kicked out of the brothel. Finally he returned repentant to his father who forgave and took him back. There are also other windows donated by people of different occupations, e.g., fishermen, cobblers, carpenters, weavers, farmers, illustrating their daily lives at the time.” – Niloo 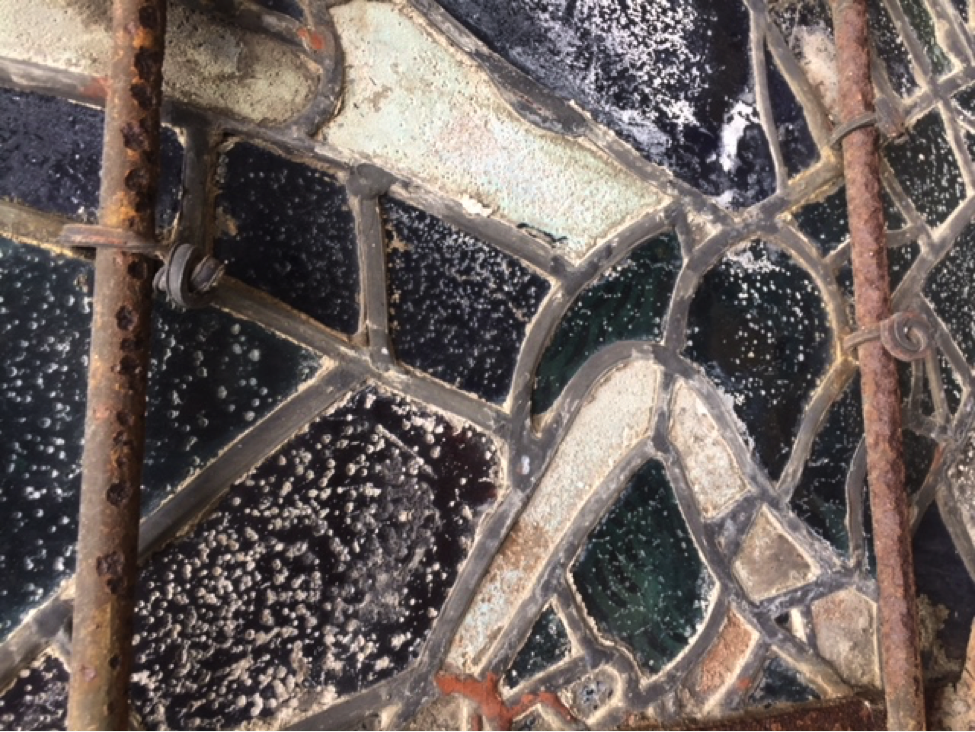 Some of the participants climbed the 16th century Gothic North Tower for a fascinating explanation of what time and air pollution during the last century have done to the windows. Thanks to the painstaking efforts of devoted professionals supported by AFC, many have been restored to their former brilliance. 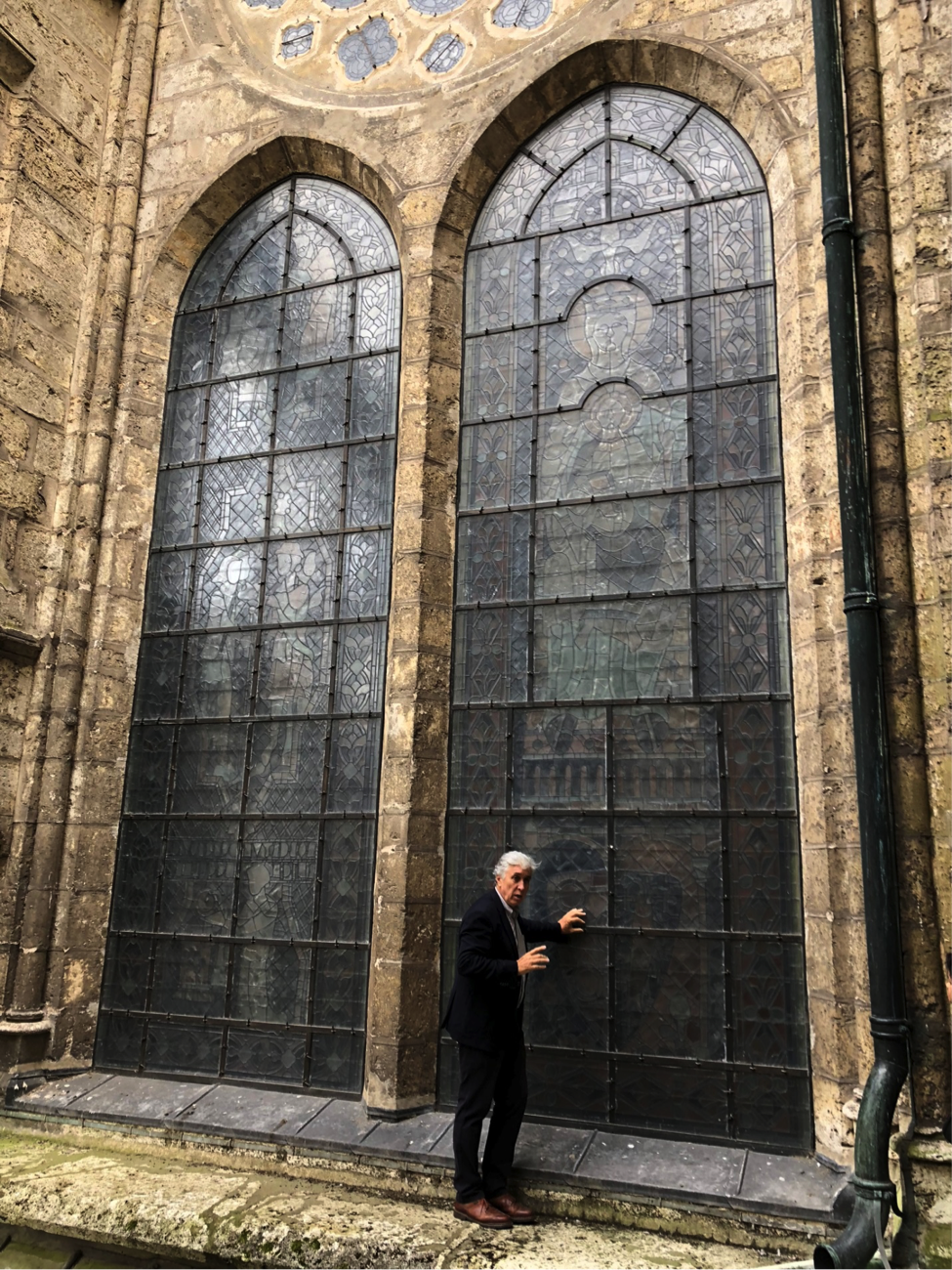 “Discussion of a restored window with layer of protective material, led by Paul Trouilloud, architect of historical monuments.” – Enid 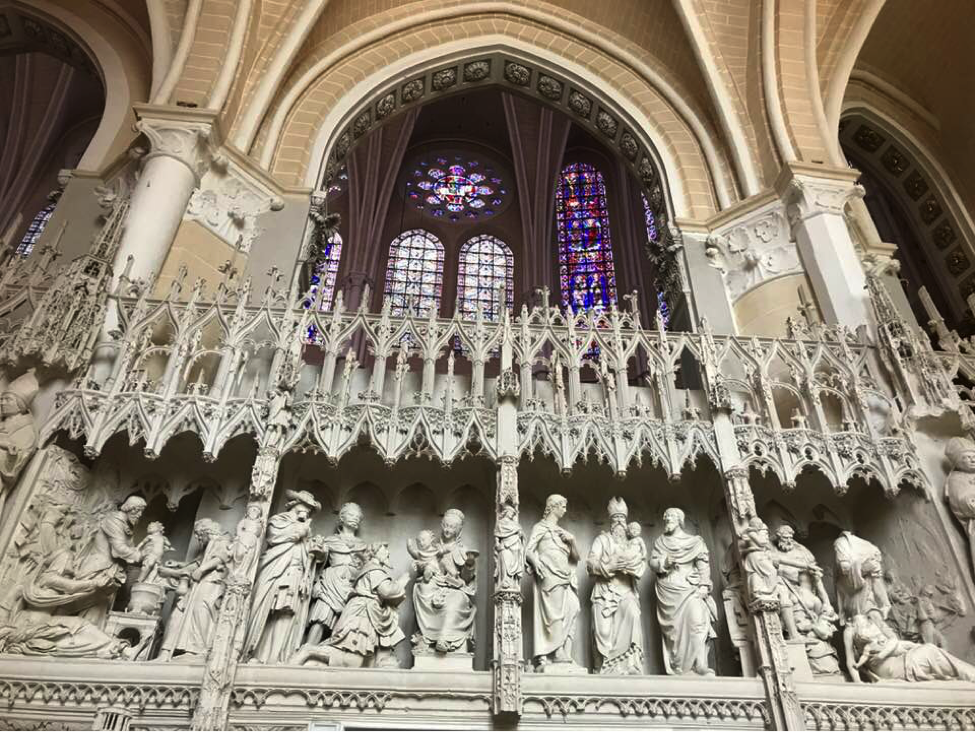 “Beautiful marble work surrounds the choir, one depicting the circumcision of Jesus. Part of it has been cleaned, but the other half is still dark.” – Niloo 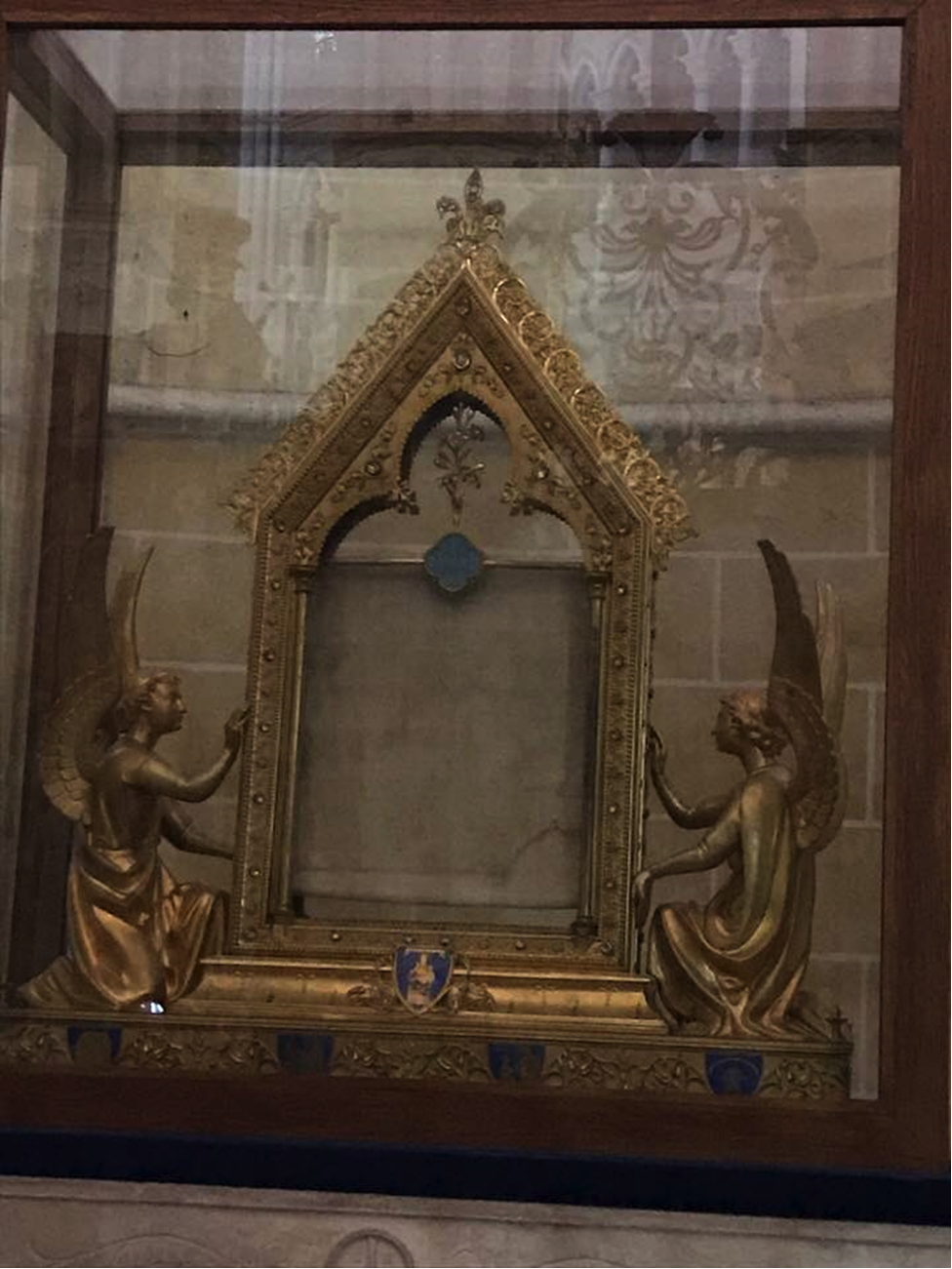 “One of the most important treasures of the cathedral is the Veil of the Virgin from when Mary gave birth to Jesus. It was a gift from Charlemagne.” – Niloo 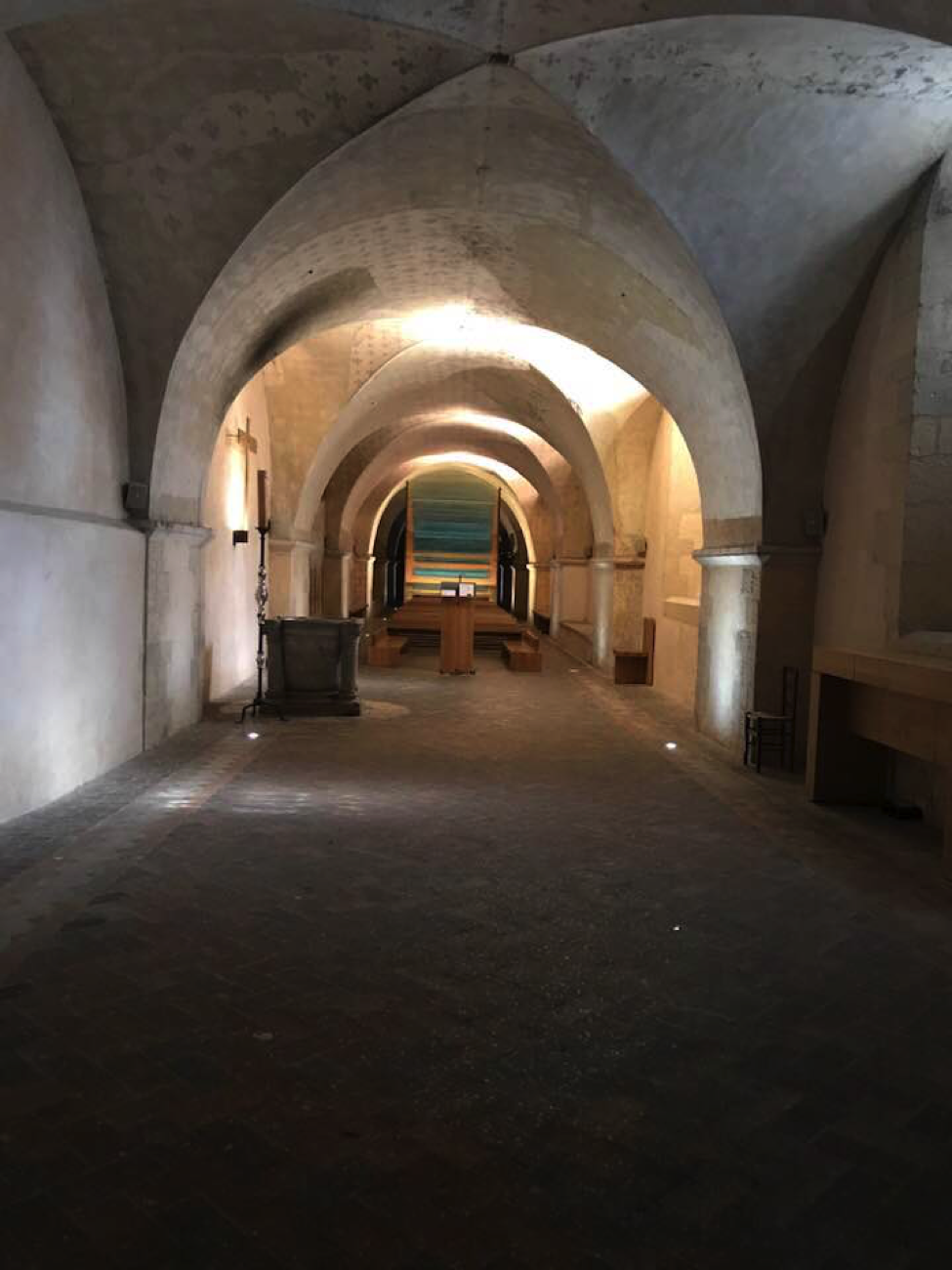 “Beneath the cathedral is the crypt, most of it dating from the early 11th century, including chapels where masses are held every day and people are baptized from water kept in a 12th century stone bowl.” – Niloo 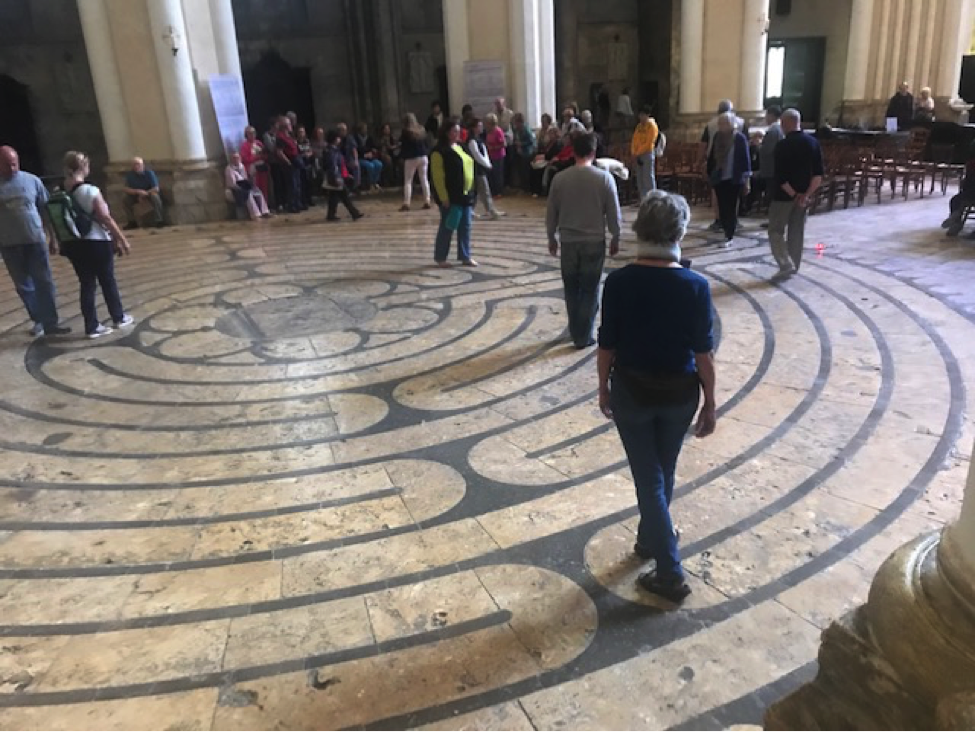 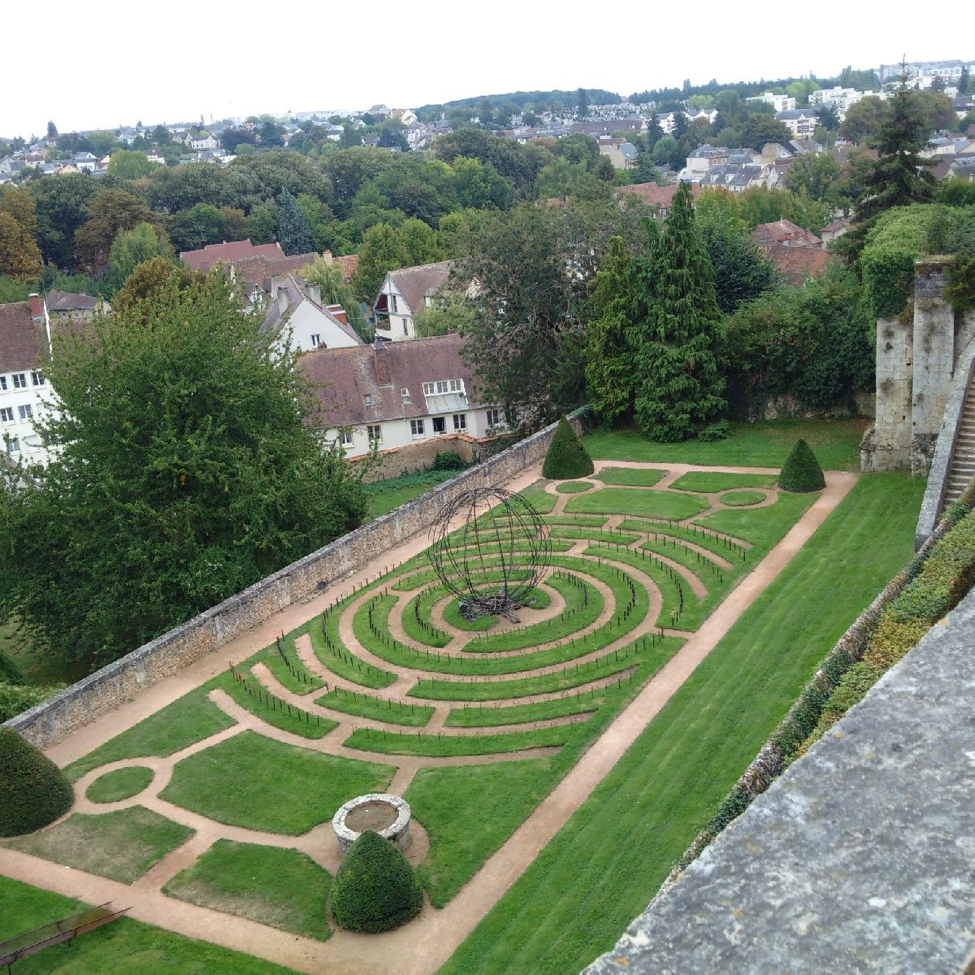 “The labyrinth behind the cathedral.” – Prasi

In the city of Chartres, the group visited the public library to learn about the priceless collection of medieval manuscripts, some of which have been miraculously restored since the tragic allied bombing during WWII which destroyed most, and took a walking tour. 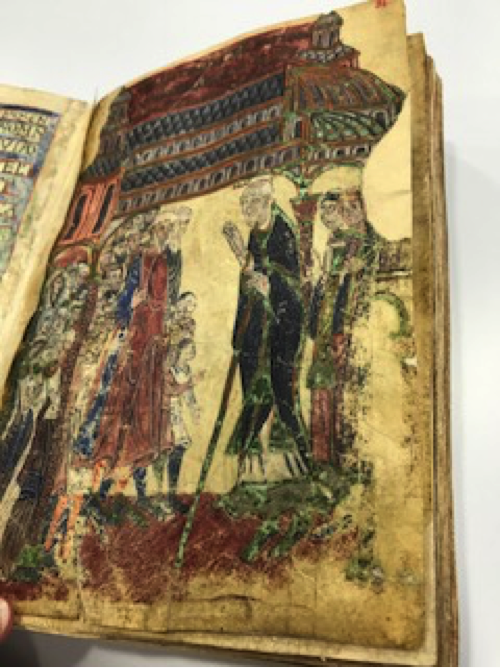 “Beautiful 14th century buildings, for which citizens were taxed both by the church and the Count of Chartres. The tax was based on the measurement of the ground level façade. So to keep the tax low, people made smaller foundations, then made the second floor larger with strong beams. Fascinating” – Niloo

The group also travelled to nearby La Bourdinière-Saint-Loup to visit Claire Babet’s Workshop devoted to the restoration and creation of stained glass windows; Claire Babet’s atelier restored the Bakers’ Window with financing from American Friends of Chartres. We then traveled to Lèves to visit the memorial park of American Col. Griffith, remembered for saving the cathedral from demolition before being killed near the end of WWII, followed by lunch with the Mayor and Deputy Mayor. 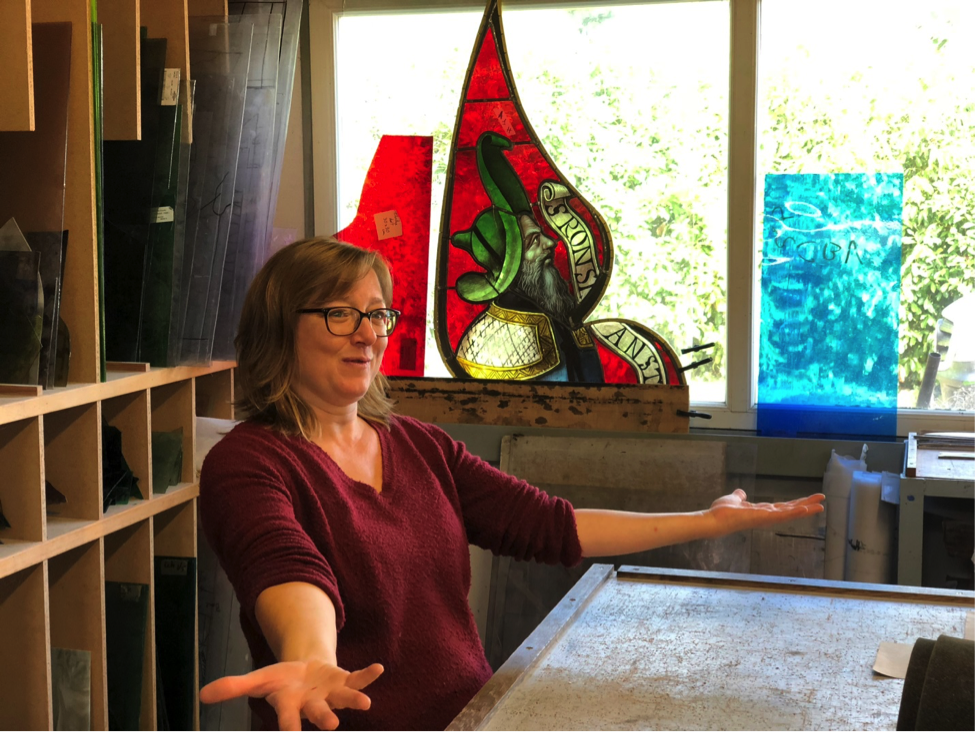 “I marveled at this long process that created so much beauty, light colors – looked like jewels” – Niloo 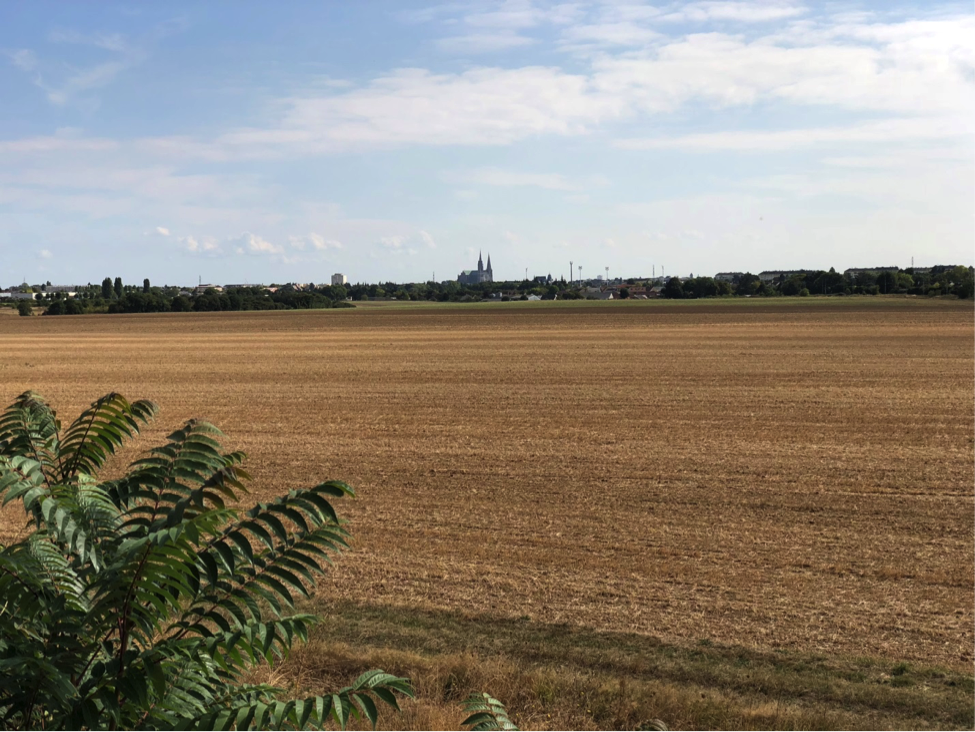 “What a view from the wheat fields!” – Prasi

Before leaving Chartres, the participants enjoyed the Mayor’s reception and “sound & light” throughout the city as part of the cultural heritage days festivities and attended the High Mass in the cathedral celebrated by the Bishop of Chartres with beautiful organ music. 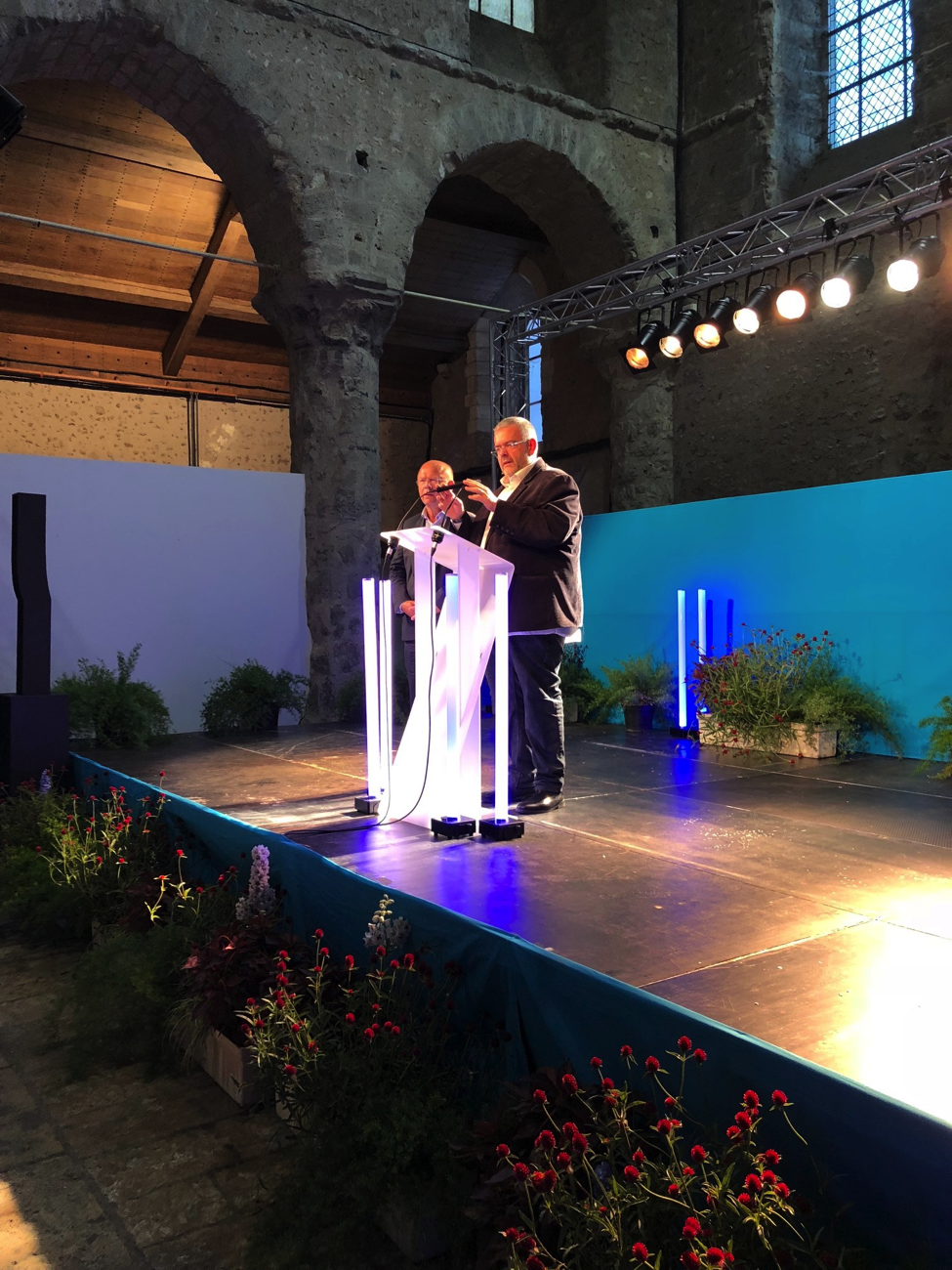 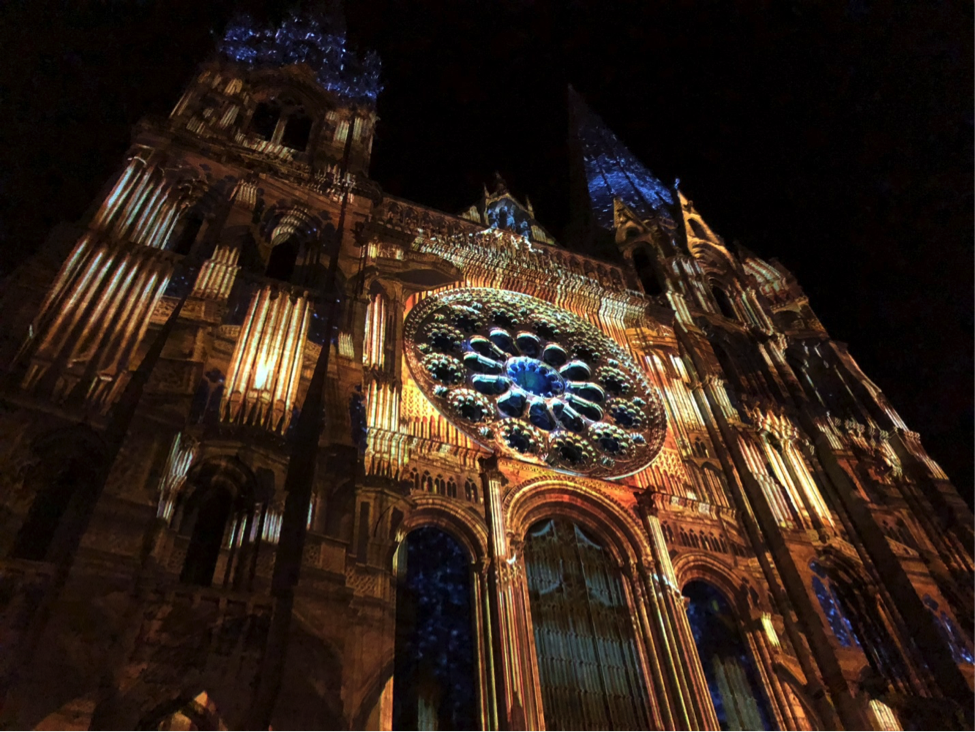 “What a glorious spectacle!” – Doug

Long live Chartres and AFC for helping to preserve it for future visitors!